Wigan completed their first league double over a club this season as rock-bottom Southampton brought their sieve of a defence to the DW on a miserable wet afternoon. If you were following the live tweets @realtimeFM, you’ll have noticed that the first-half was interrupted by a power cut, so when play resumed, the Latics switched to a flat four across the middle. Here’s how it went:

We’re underway at the DW, kick-off delayed when Wigan manager GS got stuck in a queue at the Co-Op. Saints get us going.

5′ Franco Di Santo cautioned inside five minutes for a theatrical tumble in the penalty area.

10′ All Saints here at the DW. Wigan’s back three under a lot of pressure. Lakeland and Puncheon linking up well.

We’ve had to restart the first-half here at the DW far a brief power cut. Sigh.

22′ REGINALDO scores 7 minutes into his Wigan career, cracking one home from the edge of the area to give Wigan the lead.

28′ McCarthy heads one off the line as Saints press for a quick equaliser. Jose Fonte chipped Schenkel from just inside the box. 1-0 Wigan.

32′ Only a matter of time before Shaun Maloney bags a goal for Wigan. Keeps cutting in unchallenged from the left. Shot tipped wide by Boruc.

33′ 2-0 from the corner. GUIDETTI wheels away in celebration after the ball crashes in off the bar, but suspect Saints player got last touch.

38′ 3-0 Wigan. Maloney floats the free-kick in from the right wing and DI SANTO rises highest in the middle to loop the header home.

42′ Saints defence being carved like a hot knife through butter. Di Santo only denied by the post as he waltzes through to the six yard box.

Wigan manager GS has chased his three pet ducks around his garden to get them to bed, so it’s time for the second half. Latics 3-0 Saints.

Saints made a change at HT, Wigan making one now after 50 minutes. Ademi comes on for Di Santo.

61′ Clattenburg flashes yellow at Gary Caldwell after the Wigan skipper clatters through the back of Fonte. Not a lot else happening.

63′ Yellow for Bardachow after he ends Reginaldo’s surge down the right unceremoniously.

64′ 4-0 Maloney lofts the freekick in from the right, and WATSON bur-oh fuck off, the flag is up. These Wigan FKs are deadly though. 3-0.

65′ It’s 3-1! Saints take the freekick quickly and Lambert breaks down the left, he squares for PUNCHEON to slam home at the far post.

81′ Into the final ten here, game devoid of interest since the Saints goal. Wigan mainly smacking it out for goal kicks. Stam replaces Boyce.

86′ MALONEY gets the goal he so richly deserves to make it 4-1. His low cross from the left baffles Boruc who lets it slip on at near post.

90′ Two minutes to be added on. Can Wigan match their 5-1 win down in Southampton back in September?

92′ Wigan have four corners in a row as the game draws to a close. 30 seconds of stoppage time remaining, Saints well beaten. 4-1. 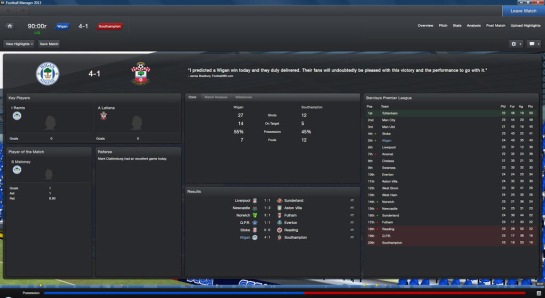 * Paris St Germain have bought Leighton Baines from Everton for £16.75m. Wigan receive £250k as part of a sell-on clause.

* Wigan’s next match is hosting Arsenal in the FA Cup Fourth Round, Sunday 27th January.