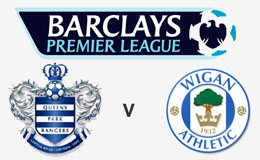 QPR bowed out of the Premier League with their third win in eight days with a late double-salvo from substitutes seeing off the challenge of a Wigan Athletic side who started brightly and hit both posts but didn’t test Julio Cesar anywhere near enough to appease their fans today. Wigan Athletic can look forward to European football next season with their 6th-placed finish, while QPR fans will be in for a nervous summer after their relegation.

Preview: The Premier League season draws to a close this afternoon, and already-relegated Queens Park Rangers are set to host a Wigan Athletic side on course for their highest ever league finish and European football next season. QPR have been poor all season, and in the bottom three since late September, but have won two of their last three home games, including an incredible comeback to beat Chelsea 3-2 in midweek after being two-down at the break. Wigan travel to London in good form, just one defeat in the last seven and scoring six goals in their last two.

Rangers will likely be without Jose Bosingwa who doesn’t look like he’ll recover from a hamstring injury in time, and will also miss the services of Anton Ferdinand. Wigan have just the one issue, whether Ivan Ramis will be fit enough to return to action following a thigh strain. Latics will probably field the same starting XI that saw off Newcastle 3-1 at home last weekend, meaning top scorer John Guidetti will start on the bench for his last game on loan from Manchester City. Wigan won the reverse fixture 2-0 on Boxing Day.

A preview of the day’s Premier League matches can be found here.

QPR unchanged but Wigan have recalled John Guidetti to the starting XI ahead of Arouna Kone.

BBC London: “Not the easiest game to predict but, having said that, I’m not putting my money on QPR today. Even though Wigan are struggling away from home at the moment I still fancy the Latics to win this one, QPR’s task will not be made any easier by the absence of Anton Ferdinand and Franz Schiener.

0′ Andre Marriner gets us underway!

2′ QPR win an early corner when Shelvey gets away down the left before McArthu’s challenge. Al-Habsi comes to claim safely.

8′ Garcia heads behind Granero’s cross for a corner. Wigan don’t clear and Granero whips the ball back in. Zamora heads home but flag’s up.

9′ Di Santo has a glorious chance after Al-Habsi hoofs the freekick upfield. He beats Mbia to the ball but his shot is well saved by Cesar.

21′ Frenetic stuff here at Loftus Road but both sides lacking any quality in the final third. Meanwhile, Chelsea 1-0 up at Southampton.

22′ Zamora looks offside but the flag stays down, he squares for Hoilett who somehow blazes over when it looked harder to miss than score.

30′ Jean Beausejour smacks the post after he controls nicely and beats Fabio. Cesar nowhere near it. Guidetti inches away from the rebound.

31′ UPDATE: Nani has scored for United at Swansea. With Spurs-WBA goalless, Man United will win the league.

37′ Emmerson Boyce is the first player in Marriner’s book after he’s late on Mbia. Still 0-0 here, but there’s goals in this!

38′ Jonjo Shelvey is a whisker wide with the freekick.

41′ 1-0 QPR! Zamora catches Evatt in possession and slips the ball to Junior HOILETT. He strides forwards before cracking past Al-Habsi.

45+2′ Reginaldo hits the post with a drive from 20 yards. Di Santo taps rebound back to Guidetti but his shot is charged down and cleared.

HALF TIME: QPR 1-0 Wigan. Hoilett the difference five minutes before the break, Wigan have hit both posts.

46′ No changes at the break for either side. We’re back underway!

47′ Di Santo charges his way down the left, cuts inside and fires past Cesar at his near post. The ball misses by mere inches.

50′ Wigan manager GS has replaced Boyce with Arouna Koné and Latics have changed to 3-4-3 for the last 40 minutes of the season.

58′ Zamora offside again, FK taken quickly and ends up with Guidetti who first a shot just wide from 25 yards.

63′ West Brom have equalised at Spurs, with with Swansea holding Man Utd, the PL trophy is still heading to White Hart Lane.

70′ Third change for Wigan, Mauro Boselli comes on for top scorer John Guidetti whose loan from Man City runs out after today.

78′ Beausejour is penalised for a trip on Shelvey right on the edge if the area. This is Granero territory.

78′ Shaun Wright-Phillips comes on as a sub with Cissé (replacing Zamora and Park) and fires it high and wide.

80′ Darren Fletcher fires Man United in front at Swansea. Spurs have ten minutes to score or United win the league!

81′ Danny Graham equalises for Swansea. Spurs are back on top!

86′ It’s THREE! Wright-Phillips’s pace is too much for Wigan’s back three to cope with, he skins Garcia and crosses for CISSÉ to tap home.

87′ Ian Evatt clatters Shelvey and goes in the book. Meanwhile Spurs are down to ten men, Assou-Elotto sent off at White Hart Lane.

90′ One minute of stoppage time to be played.