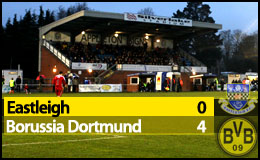 BVB’s senior squad play their third of four friendlies in the UK tonight, taking a trip down to the Silverlake Stadium, home of Conference South side Eastleigh. Marco Reus is absent from the squad (hamstring), as are youngsters Julian Koch and Daniel Ginczek. Mitchell Langerak is in South Korea with the Australian national side.

Manager Grayson Surman will play the strongest possible squad, using the match as a real opportunity for the team to gel with a new assymetric system ahead of Monday’s match at Rangers. The match was originally arranged for last night ahead of playing a friendly against Surman’s old club Wigan Athletic later in the week, but that was cancelled due to their participation in the Europa League.

Viktor Fischer is likely to remain in the starting XI after his two goals in the 4-1 win at Newcastle on Saturday. Taye Taiwo will return to first-team action after playing with the U23s side in the 0-1 defeat by Chelsea Reserves. Marc Hornschuh and Lasse Sobiech may make the bench after impressing in the match at Stamford Bridge. The U23s’ next fixture is on Sunday at Tottenham Reserves.

Jakub Blasczykowski may not feature after Dortmund accepted a £5m bid from VfB Stuttgart over the weekend. Mario Götze and Sven Bender will more than likely return to the starting XI.

Eastleigh FC play in Blue Square (Conference) South, the sixth tier of the pyramid, where they have established themselves as a good footballing side since their promotion to the division in 2005. The club, based about six miles from Premier League neighbours Southampton, play their home games at the 3,000-capacity Silverlake Stadium in Stoneham Lane.

The Spitfires, founded in 1946, can call on a fully fit and available squad with just one exception – Rubén Bover Izquierdo – who will be out for another fortnight or so after breaking a bone in his foot towards the end of last season.

Eastleigh finished 5th in the division last season, their best finish since 2009’s 3rd place, before losing in the Playoff Final to Dover Athletic on penalties.

Click the above image to open a full-size version of the starting lineups in a new window.

0′ A slight delay as the capacity crowd filter in, but the home side get us underway against this first-choice Dortmund XI.

4′ McGuire is very late catching Perisic and earns a stern talking to from referee Mike Jones. The two players collided a little beforehand.

7′ Weidenfeller is the first ‘keeper to get a touch, he comes to claim Ademola’s cross from the right.

9′ Eastleigh defenders back off Götze, letting him bring the ball forwards some 30 yards. Jordan and McGuire pair-up to deny him in the box.

12′ Lewandowski is given too much space on the edge of the areas he turns inside and shoots high at goal but Dovey saves well for a corner. 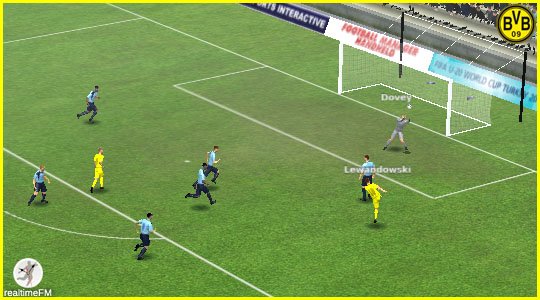 14′ Another BVB corner. Götze’s cross blocked from the right.

15′ MATS HUMMELS meets Perisic’s corner at the near post and flicks the ball past Dovey for the opening goal. 1-0 Dortmund.

19′ Subotic clears a dangerous through ball with a towering header above Styche.

22′ Fischer plays a fantastic ball forward into Lewandowski’s timed run, but Eastleigh ‘keeper Jack Dovey is quick off his line to claim it.

27′ Tom Jordan has given away a free kick in a dangerous area. Just outside the D, quite central. Adjudged to have held back Götze.

27′ Taiwo’s free kick is deflected by the wall and Götze is eventually penalised for being offside.

28′ Styche brings the home crowd to their feet as he gets a yard or so on Hummels on a run into the box, but Subotic makes a great challenge.

29′ Götze is challenged on the edge of the area and the loose ball is struck low and hard by Perisic. Dovey is at full stretch to palm away.

31′ Styche makes space to get a shot away from the edge of the box but he’s pulled it wide and it clips the outside of the post.

32′ Götze charges down the right, his cross to the near post hacked away for a corner.

33′ Tom Jordan charges down a shot from Perisic, the ball comes as far as Fischer who curls it wide from the edge of the box.

37′ Beck ghosts in behind the fall back and collects Götze’s long ball forward. Sankofa makes a great last-ditch challenge before he shoots.

38′ Perisic floats corner to the near post and Dortmund have a second! MATS HUMMELS gets his head to the ball and it’s in off the post. 2-0! 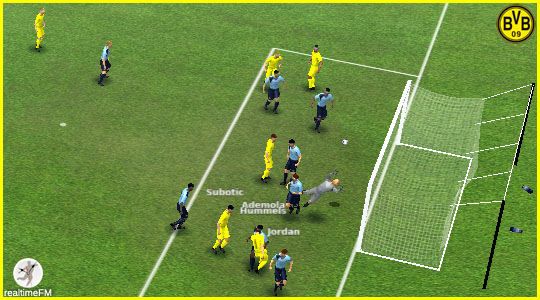 43′ Eastleigh win pair of corners in quick succession. Green does well to keep the ball in on right, finds McAllister who stabs goalwards.

45+1′ There’s half time, Dortmund comfortably 2-0 up thanks to a brace from captain Mats Hummels, both from corners on the right.

HT: Two changes at the break for BVB. Bender and Blaszczykowski replace Leitner and Perisic.

46′ BVB kick off the second half as we get the official attendance of 2,300 announced over the tannoy. It looks busier than that, to be honest, there’s not space for an extra 700 here.

46′ Looks like Dortmund have changed to an asymmetric system, pushing Götze more central, dropping Bender back to cover the back four.

48′ Scare for Subotic as he slips and Styche is clean through. He fires straight at Weidenfeller from 8 yards but the flag’s up anyway.

49′ Fischer and Lewandowski play a one-two and set Götze clear. His full-pace advance is halted unceremoniously by Jai Reason 20 yards out.

49′ Just a talking to. I expect we’d see a card on a competitive night. Colour debatable either way. Götze curls free kick into Dovey’s arms.

53′ Bender picks the ball up in the centre circle unmarked and launches a long ball forward for Lewandowski. He’s in behind the back four…

53′ That’s three-nil! ROBERT LEWANDOWSKI gets away from Russell, brings the ball down on his chest and slots underneath Dovey from 18 yards.

56′ Sven Bender has a go from 25 yards, curling a shot inches wide of the top right-hand corner out of nothing.

59′ Fischer does well on the left to pick out Gündogan. He knocks the ball inside for Götze but his shot is deflected wide by Russell.

61′ Interesting rumour from BVB camp that Marco Reus may fly out for the Rangers friendly on Monday. Hamstring injury keeps him out today.

64′ Gündogan picks out Blaszczykowski’s run on the far side, and the Polish winger wins a corner. Kevin Großkreutz comes on for Fischer.

67′ Blaszczykowski somehow pokes the ball wide from 5 yards at the near post, meeting Großkreutz’s first-time cross.

68′ Looks like we have a mass BVB change coming soon. Six players with the fourth official.

Click the above image to open a full-size version of the post-substitution lineups in a new window.

75′ Two more changes for BVB. Götze and Hummels withdrawn for Roberto and Sobiech.

78′ Piszczek catches Williams late as they jump for a header. Mike Jones cautions the Dortmund right-back as the pair square up.

80′ Schieber knocks the ball back to Bittencourt on the edge of the box but he blasts a shot over the bar.

81′ Getting a little feisty here. Roberto trips Southam as the Eastleigh goes by him. He joins Piszczek in Mike Jones’s book.

85′ 4-0 Dortmund. Out of nowhere KEVIN GROßKREUTZ takes a touch on the edge of the D and skips a shot off the wet grass past Dovey.

86′ Two more changes for Eastleigh ensuring everyone gets game time. Bright replaces McGuire who started, and Hughes has come on for Williams.

89′ Eastleigh attackers all looking to create a bit of space to fire off a shot from 20-25 yards out. Who wouldn’t want to score tonight?

90′ One minute will be added on at the end of the ninety.

No one is remotely surprised by Dortmund’s dominance and the scoreline, but that’s not why Surman brought his team here tonight. Sandwiched between two matches which would test his side as well as a Bundesliga match (Newcastle and Rangers), it was an opportunity for his side to impress and show their hunger for starting places.