The first sell-out crowd of the season at Signal Iduna Park saw BVB overwhelm Fortuna Düsseldorf tonight, with an emphatic 5-0 win that was much needed after a lacklustre performance at Leverkusen on Sunday. Surman made seven changes to the team, giving a début to Lasse Sobiech who was paired with fellow 22 year-old Marc Hornschuh at centre-back.

Goalkeeper Mitchell Langerak, Taye Taiwo, Kostas Katsouranis, Moritz Leitner, and Julian Schieber were the other players rotated into the starting line-up, while Marco Reus was named as a substitute after four weeks out.

Marc Hornshuh headed BVB in front from a corner inside the opening ten minutes for his first goal for the club, before Kevin Großkreutz added a second three minutes later. Düsseldorf rarely threatened during the remainder of the half, with a couple of half-chances fired wide.

After the interval, which saw Ilkay Gündogan replace Leitner, BVB won two corners in quick succession, and Hornschuh arrived at the near post in a repeat move of his opening goal to double his personal tally and put Dortmund 3-0 up after 47 minutes.

Having denied the visitors a single shot during the second half, be it on or off target, BVB smelled blood. The introduction of Marco Reus gave the team some extra movement up front and Julian Schieber poached a tidy pair of goals inside the final ten or so minutes to make the final score 5-0.

“I believe Dortmund have enough quality and strength in depth to win tonight. Nando Rafael has scored all of Düsseldorf’s last five goals and his absence will hit them hard.” – Andreas Holtz, Dortmund Daily.

[00] The visitors get us underway at Signal Iduna Park, as 8th host 7th.

[01] Kostas Katsouranis captaining the side tonight, with Hummels not in the matchday 18, and ‘keeper Weidenfeller on the bench.

[04] Corner to Dortmund. Ivan Perisic’s burst into the box halted by a good challenge by Stelios Malezas.

[05] Ivan Perisic pokes BVB in front after a through ball by Großkreutz, but he’s rightly flagged offside.

[06] Andreas Beck hacks away a Düsseldorf cross and they win their first corner.

[08] 1-0 DORTMUND! Ivan Perisic’s corner is headed home at the near post by Marc Hornschuh, his first ever goal for the club! 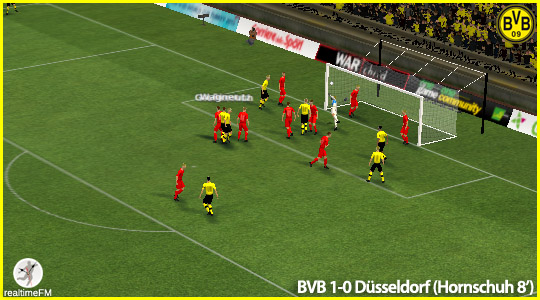 [10] Langerak makes a great save to deny Sandro Wagner after he beats the offside trap from Atdhe Nuhiu’s ball. Hornschuh clears.

[11] 2-0 DORTMUND! Perisic pops the ball over the top for Schieber, he gets to the goal line and pulls back for Kevin Großkreutz to tap in.

[11] Elsewhere, former BVB captain Sebastian Kehl has been sent off for Köln at BMG, and Leverkusen are 1-0 up hosting Stuttgart (Rofles).

[14] Marcel arises arrives at the far post but can’t get his shot on target, great chance to pull one back.

[17] Nuhiu gets in behind the back four and tries to lob Mitchell Langerak but he gets back to tip the ball over the top.

[19] Junior Fernandes has put Leverkusen 2-0 up at home to Stuttgart.

[20] BVB living a little dangerously at the back, maybe just missing a cooler, experienced head. GS asks for focus.

[21] Great work from Leitner to win the ball, he feeds Perisic who goes past two. Eventually, Fischer has a shot deflected narrowly wide.

[30] Half hour played, BVB on top and full of pace upfront. Düsseldorf creating chances though. Stuttgart have pulled one back at Leverkusen.

[31] Perisic flicks on Großkreutz’s cross and Viktor Fischer’s shot from six yards is cleared off the line. A whisker away from a goal.

[32] Marc Hornschuh heads the corner narrowly over the bar. He’s winning headers at both ends tonight.

[33] Vedad Ibisevic has hit two in two minutes to draw Stuttgart level at Leverkusen. 2-2 there now.

[37] Großkreutz fires a volley goal-wards which is well parried by Almer, Fischer’s shot on the rebound is again deflected wide.

[40] Düsseldorf create opportunities on the break, but can’t get enough men in the box to finish chances. BVB defence doing their job well.

[43] Couple of minutes to go here in the first half. You get the feeling BVB might make a change and tighten the back up a little.

[45] We’ll have a minimum of one extra minute here.

[45] Fischer is tripped by Tonel as he goes past him. He’s a long, long way out, but he would have been clean through. Just a free kick.

[47] The hosts got us underway a moment ago, as the attendance is announced as a full house of 80,720. First sellout of the season for BVB.

[47] 3-0 DORTMUND! BVB have a pair of corners to start the half, the second is headed home by Marc Hornschuh, a replica of the opener!

[52] Bodzek is the creator of most things for the visitors. He plays Lambertz in but Taiwo gets back to challenge.

[58] Taye Taiwo sends a low cross into the near post which Ivan Perisic knocks against the woodwork from a yard out.

[61] Andreas Beck floats a cross into the middle of the box but Ivan Perisic can’t get enough power behind his header to trouble Almer.

[67] Adam Bodzek (7.7) is replaced by Cha Du-Ri after injuring himself in a challenge on Gündogan.

[72] Corner to BVB. What odds on a Hornschuh hat-trick?

[73] Well, it won’t come from a corner that Gündogan floats straight into Almer’s arms. Jinxed it.

[74] Cheers echo round the ground tonight as Marco Reus removes his training jacket and appears with the fourth official.

[76] Substitution for Dortmund: Marco Reus comes on for scorer of the second goal, Kevin Großkreutz (7.7).

[79] 4-0 DORTMUND! Gündogan runs at the defence, Fischer feeds Katsouranis. His shot is parried away but Julian Schieber drills the rebound home.

[82] Niclas Füllkrug has fired Werder Bremen back in front in their home match against SC Freiburg.

[84] But not for long as Jan Rosenthal gets his second of the game to draw Freiburg back level, it’s 2-2.

[85] Five to go. Such has been the home side’s domination that Düsseldorf haven’t managed a single shot – on OR off target – since the break.

[86] 5-0 DORTMUND! Katsouranis finds Reus who hooks the ball into Julian Schieber. His initial shot is saved, but he’s first to the rebound again! 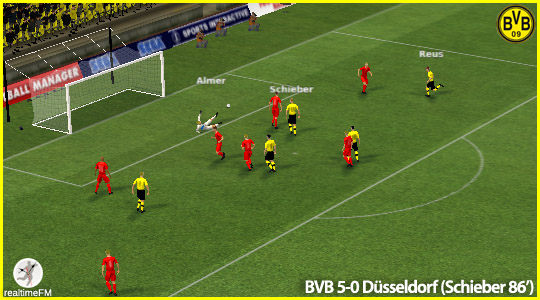 [90] Two minutes go up on the fourth official’s board.

[93] Late winner for 10-man Köln at BMG, Jong Tae-Se in the third minute of stoppage time.

Great win tonight for BVB, and a stellar three-goal second half performance that saw them not allow Düsseldorf a single attempt at goal for the entire period. Marc Hornschuh follows Felipe Santana and Neven Subotic in having stand-out performances at centre-back whilst deputising for Mats Hummels. It’s a nice dilemma that Gray Surman will have on his hands ahead of Saturday’s trip to FSV Mainz, who sit a point above the bottom three.

The win lifts Dortmund up to fourth (Düsseldorf drop a place to 8th) and will hopefully kick-start a run with four consecutive home games ahead of the club. Marco Reus made a return to the first-team and had a hand in the last two goals, that’ll do him the world of good. Schieber increased his stock too, and Perisic had a brilliant game in Götze’s usual position behind the striker. 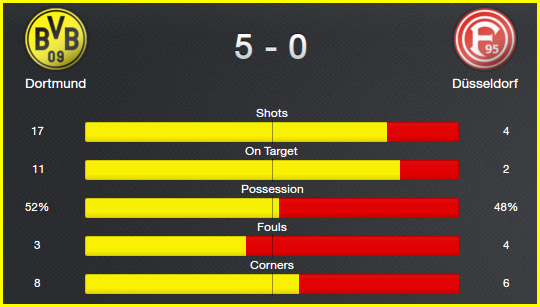