Dortmund are still looking for an away win in the league after being stung by a three-minute , two-goal salvo from the hosts shared the points with a 2-2 draw. Sven Bender poked BVB in front within five minutes of the second half, and doubled the lead when substitute Marco Reus smashed home a loose ball with quarter of an hour to play.

As home fans started to trickle out, Petar Sliskovic brought the ball down on the edge of the box, had time to take a touch and drill the ball past Mitchell Langerak on his 50th league appearance for BVB. Two minutes later and Mainz were level, Stefan Bell evaded Mats Hummels and headed a corner home. The visitors finished the strongest and had a strong penalty shout turned down shortly after. 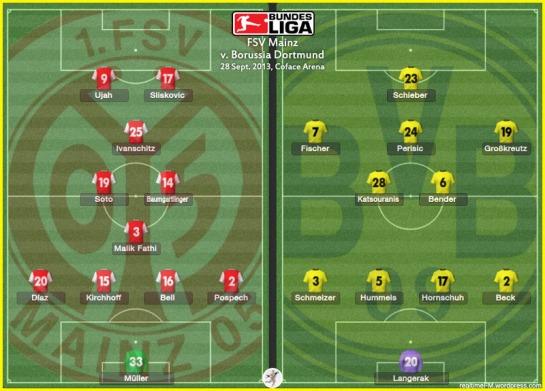 “I fancy Dortmund to win this one. Having looked at the line-ups, Dortmund seem to have more about them than Mainz and I expect this quality to show through during the match. The absence of Eugen Polanski and Maxim Choupo-Moting will also hit Mainz hard.” – Mikhail Andreev, worldsoccer.com.

[00] Three changes for BVB, bringing back captain Mats Hummels, Sven Bender and Marcel Schmelzer. The hosts get us underway here in Mainz!

[01] Andreas Ivanschitz gets by Mats Hummels chasing a long ball and goes down under the challenge. Yellow card for the BVB captain.

[02] BVB survive the free kick and win a corner on the counter attack. Hummels gets on the end of it but the Mainz keeper gathers.

[09] All square in Stutgartt now as the hosts dream level against BMG through Tamás Hajnal.

[13] Marcel Schmelzer is cautioned for bringing down Julian Baumgartlinger on the right wing.

[16] Schmelzer sends a wicked ball in towards the far post, Schieber is a whisker away from connecting and the ball bounces a yard wide.

[17] Beck’s cross is headed goalwards by Schieber, and Fischer pounces on the rebound but the flag’s up correctly.

[18] Perisic and Großkreutz both put headers over at the far post from crosses from Schmelzer. BVB really upping the pace now.

[22] Diaz concedes a free kick to edge of the Mainz box, but makes up for it with a. Towering clearing header. Ball ends up fired high over.

[32] Last ten minutes spent largely with the ball being pinged into the box by Dortmund, but Mainz have 10 men behind the ball all the time.

[36] Mainz work a free kick into the box and Hornschuh takes charge, belting the ball away. BVB can counter down the right here.

[37] Mainz have come to life, Schmelzer needs to head away a dangerous cross as Langerak is stranded. Diaz pulling strings for the hosts.

[38] BVB commit their 8th foul to Mainz’s 7, and earn their 3rd caution to Mainz’s 0. Sven Bender booked for a foul on Sliskovic.

[39] Katsouranis penalised for a push on Baumgartlinger on the edge of the D, dead central.

[44] Mainz win a corner which ends with Sliskovic prodding the ball wide from a tight angle. Meanwhile, BMG are back in front at Stuttgart.

[47] Lively start to the second half, couple of fouls, BVB work a free kick just wide. Hannover go 2-0 against Fürth through Karim Haggui.

[49] 1-0 DORTMUND! BVB take the lead from a corner (what else?). Woeful marking allows Sven Bender to head home from inside six yard box.

[57] Andriy Voronin puts Frankurt 1-0 up at Freiburg, and John Chibuke puts Werder Bremen in front at Nürnberg. Goals in each of the five matches today now.

[65] Marco Reus and Robert Lewandowski are coming on for Dortmund, replacing Viktor Fischer (7.0) and Kevin Großkreutz (7.0).

[66] Hummels has a gilt-edge chance to double the lead. Gündogan heads a corner back towards the near post, Hummels has time but puts wide.

[68] Lewandowski outpaces the centre backs, rounds the keeper and inexplicably fires wide from 12 years. Blushes spared by the offside flag.

[70] Freiburg have equalised at home to Frankfurt through Matthias Ginter, cancelling our Andriy Voronin’s penalty 10 minutes ago.

[73] Great work from Schieber on left, switches ball to Beck who gets the ball into the box, Perisic has a pop but Mainz eventually clear.

[76] 2-0 DORTMUND! Perisic crosses for Schieber whose initial effort is saved, but Marco Reus slams the ball into the top corner.

[78] Frankfurt are back in front, 2-1 at Freiburg, through Alexander Meier.

[80] Attendance today is 32, 635 though starting to decrease as home fans make for an early exit.

[81] GOAL MAINZ 1-2! Petar Sliskovic controls the ball on the edge of the box, takes a touch and slams it past Langerak for a lifeline!

[88] Röser goes down inside the box under a challenge for Hummels who looked to win the ball for a corner. Mainz furious about the decision.

[89] Mainz have another pair of corners, Hornschuh clears the first, Langerak safely gathers the second. Hosts finishing on a high.

[93] Erik Jendrisek has rescued a point for Freiburg, it’s 2-2 in their home match with Frankfurt.

Dortmund get their first point on the road, but they’ll kick themselves at how they let the hosts get a hold of the game after going 2-0 up themselves. The shot statistics don’t really tell the full story of the game, BVB having a lot more of the ball in the attacking third while Mainz were happy to test Langerak from outside the box early on.

BVB will feel disappointed to have dropped two points rather than gained one, but may feel less aggrieved than Mainz who had a penalty shout turned-down with the game at two-all. Dortmund will be 5th tonight, Mainz 12th. Next up for BVB is a run of four consecutive home matches, starting with the visit of Arsenal in the Champions League on Tuesday night.