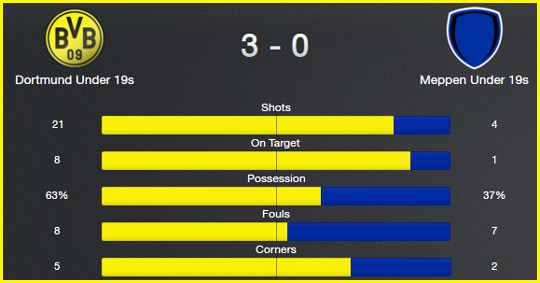 Dortmund’s academy side climb to fifth in Group 3 of the U19 Bundesliga after a dominant 3-0 win over SV Meppen who have a single point from their ten matches this season. Dortmund’s U19s are now unbeaten in ten matches and took the lead a minute before the break when Ogün Gümüstas headed home from a corner.

Said Benkarit doubled the lead midway through the second half with a fine header, before Gümüstas added a third – and eighth of the season – with ten minutes to play with a fine strike from the edge of the area. Their next match is a trip to MSV Duisburg on Wednesday 11 December. Duisburg are second in the table behind runaway leaders Schalke.