Ramires has created history by becoming the first substitute to score a brace in a World Cup Final, as the host nation Brazil came from behind to beat Italy 2-1 after extra-time at the fabulous Maracanã stadium in Rio de Janeiro.

After a goalless first-half where both sides were happy to test the ‘keepers from range, and Mario Balotelli correctly had n effort ruled out for offside, the sides came bursting back out the blocks.

Italy went in front after a spell of heavy pressure, forcing Brazil into giving away free-kicks and being able to deliver the ball into the box from the flanks. Mario Balotelli headed home Sebastian Giovinco’s 53rd minute corner to put the Europeans in front.

Brazil manager Mano Menezes made two rolls of the dice, bringing on Ramires and Marcelo following the goal, and changed shape. Vágner Love, having scored in all six of Brazil’s matches so far, wasn’t getting any change from the two Italian centre-backs, and he was denied his shot at history by being hauled off with ten minutes to go.

The move paid off almost instantly. With Neymar being able to drift, he found Marcelo who whipped in a cross from the left that Ramires stole in at the far post to head past Sirigu, the first substitute to score in a Final since Rudi Völler in 1986.

In the first period of extra-time, Neymar got away from his marker down the right before sending in a cross that Ramires deftly flicked home with his head from six yards out for the winner.

Giuseppe Rossi had a couple of efforts for Italy late on to equalise, but too often they chose to shoot from range rather then penetrate the area, and they paid for it. Despite finishing the game with ten men after Alex Sandro was stretchered off, Brazil held on to win their sixth FIFA World Cup. 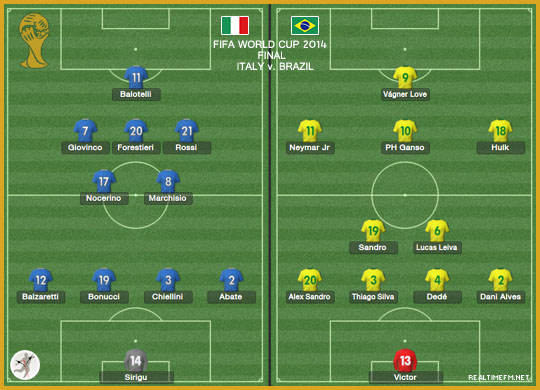 These two nations have fifteen finals between them, and nine titles, each losing in the Final twice. Hopes of a nation are with the hosts, and can Vágner Love create history with goals in all seven matches?

[00] The Turkish referee gets us under way. Italy kick-off!

[01] First attack comes from the hosts as Hulk gets inside the box and squares but Abate intercepts at the far post and coolly plays it across goal to Balzaretti who clears.

[04] Hulk’s cross into the box headed away by Abate, but Brazil work the ball back to Neymar who has a go from 30 yards. Sirigu pushes it away at full-stretch.

[07] Brazil pumping crosses into the Italian box but Abate and Bonucci dealing with them well. Crowd gets to their feet as Vágner Love goes on his first run but he’s tackled.

[08] Hulk brings the ball forwards before screwing a shot wide of goal from 20 yards.

[12] First foul of the game, Ganso penalised for a foul on Bonucci. Clean, exciting game so far.

[14] Ganso cuts inside from the right, space opens up for himself and he stings Sigiru’s palms from just outside the box. Abate gets the loose ball away before Love gets on to it.

[15] Balzaretti fortunate to escape a booking after an Italian free-kick gets cleared and Brazil counter, he clatters into Hulk on the right wing.

[16] Forestieri is fed by Giovinco but he takes it first time from 25 yards out and it’s straight at Victor. Both sides trying from long range at the moment, need to penetrate the penalty area.

[17] Hulk wriggles his way just inside the box, but before he can pull the trigger, Bonucci makes a great challenge. Love was screaming for the ball there.

[18] Leiva wins a header 25 yards out and Ganso hits a dipping volley from the edge of the penalty arc but it flies well wide.

[21] Flag stays down for Forestieri as he blazes over the bar from 15 yards out. Italy put Brazil under lots of pressure with Chiellini’s huge throw into the box.

[24] Great challenge by Leiva in the box as Rossi beats his marker and heads towards goal.

[24] Dazzling run from Neymar as he picks the ball up on half way and moves towards the penalty area, cutting right across the pitch. Hits it low and hard from the edge of the box and Sirigu gets down to push it behind. First corner. 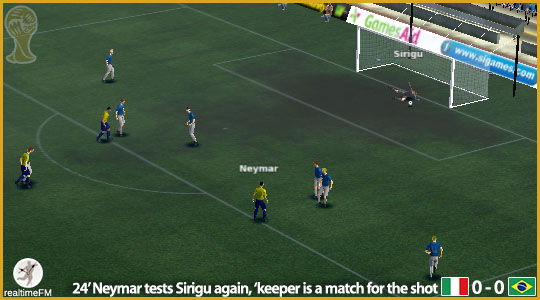 [25] Marchisio heads Hulk’s corner away at the near post and it’s cleared over halfway.

[26] Two Brazilian forwards are beyond the last defender, but the flag stays down as it’s Ganso that picks the ball up from an onside position. He smashes a shot against the post from ten yards out on a tight angle.

[27] Italy win their first corner when Thiago Silva heads behind Chiellini’s long throw into the six-yard box. Dedé is back to head off the line when Marchisio’s looping header drops towards goal.

[29] Ganso lets fly a 30-yarder which whistles over the bar.

[31] Chiellini makes a great block tackle on Ganso as an Alex Sandro free-kick lands perfectly for him. He’s spinning to hit a half-volley from twelve yards out when Chiellini flings himself in the way.

[35] Another long-range efort from Neymar after he turns Chiellini inside and out, but it’s an easy take for Sirigu.

[36] Balzaretti hesitstaes and gets a touch on a wayward ball forwards from Alex Sandro and concedes a corner he didn’t have to. Chiellini gets it away.

[41] Lucas Leiva has committed one foul too many for the Turkish referee as he brings down Marchisio and he’s the first player in the book.

[42] Mario Balotelli smashes the ball home from twelve yards out after Victor saves from Nocerino’s 30-yard drive, but the flag’s up on the far side and it looked a correct call. 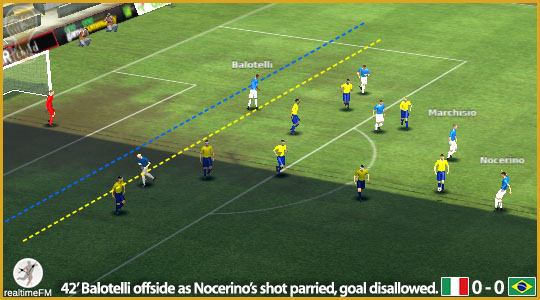 [45] We’ll have one additional minute in this first-half, as Italy have an opportunity to pump the ball in the box after Thiago Silva’s foul.

[45+1] Giovinco is a lucky man as he over-controls the ball 25 yards from his own goal, and is robbed by Sandro. The Spurs man snatches at his shot though and it’s blazed over the bar when he had time and space in front of him.

[HT] No changes at the break for either side.

[46] The hosts kick-off the second forty-five!

[52] Italy have Brazil pinned in their half since the break, the hosts keep giving away silly free-kicks and letting the Italians put the centre-backs under pressure.

[53] ITALY 1-0 BRAZIL: Giovinco whips an in-swinger in towards the penalty spot where Mario Balotelli meets it and sends his header past the diving Victor. Second goal of the tournament for him. 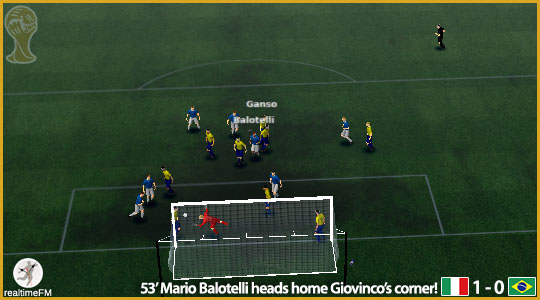 [55] Brazil look shell-shocked. Italy still being given chances to get the ball into the area. Hosts need to keep their heads here.

[58] Alves had time to clear but delays and is closed down by Forestieri right by his own corner flag. The Italian whips a cross into the six-yard box but Thiago Silva gets it away from Balotelli. Hosts responsible for all the Italian pressure so far this half.

[59] Victor makes a fingertip save to push a Balotelli free-kick from 30 yards over the bar after the goalscorer bends it round the five-man wall.

[61] Great ball from Neymar to Ramires on the overlap but he overruns it and it goes out for a goal kick.

[65] Six men back for Italy and it takes three of them to nick the ball off Love who’s played in by Neymar. The ball runs for Ramires but he doesn’t take the shot first-time and he’s eventually outmuscled and Italy clear.

[71] Twenty minutes for Brazil to rescue their World Cup dream of a sixth title, and first on home soil (would be the seventh nation to do so).

[75] Brazil win a corner of their own when Balzaretti puts the ball behind. As it’s played in, there’s a coming together and Ramires is penalised.

[79] Gilt-edged chance for Lucas Leiva to eqaulise when Marcelo sends the ball across the box, but from eight yards out he hits it straight at Sirigu. A little over ten minutes to go.

[80] Final change for Brazil and it’s a MASSIVE one from Mano Manezes. Vágner Love (6.0) is denied the perfect World Cup scoring streak as he’s replaced by Leandro Damiao.

[81] ITALY 1-1 BRAZIL: Equaliser for the host nation and it came from nothing. Marcelo picked the ball up on the left and flights in a cross to the far post where Ramires heads home from six yards. Two subs combining to draw Brazil level.

[85] Neither side wants this to go to extra-time by the looks of it, end-to-end stuff. Marcelo has a chance to win it as he cuts inside but he drags his shot wide from fiften yards out.

[88] Double change for Italy as we look towards an additional thirty minutes. Abate (7.1) and Chiellini (7.9) are both taken off at the back, replaced by de Silvestri and Astori, who takes the captain’s armband.

[90] Leandro Damiao brings the ball inside the box and fires at Sirigu but the Italian ‘keeper gets his body behind the shot.

[FT] An extra half-hour awaits! All six subs used, and Italy get us going again.

[92] Brazil have gone back to one up-top. Neymar has moved out to the right. Sandro dropping to sit in front of the back four.

[98] Italy look like they’re missing Chiellini’s long-throws. Starting to slow down the play.

[101] ITALY 1-2 BRAZIL: The Maracana erupts as Brazil go in front! Neymar does all the hard work down the right, beating Balzaretti before scooping a cross to Ramires who heads home at the far post much like his equaliser. 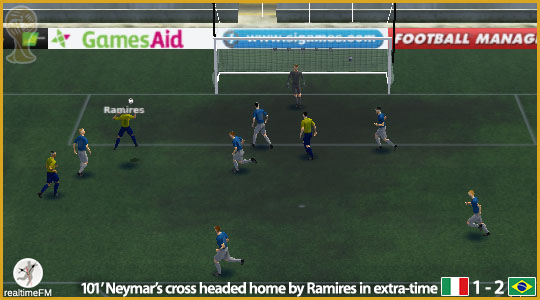 [102] De Silvestri wins the ball from Alex Sandro in a meaty challenge that leaves the Brazilian on the deck. He gets inside the box but goes for glory instead of pulling it back, and hits the side netting.

[104] Alex Sandro isn’t going to be able to continue. Brazil down to ten men after having made three substitutions in normal time.

[105+1] Neymar wins a corner off Balozetti as he tries to beat him on the right again. 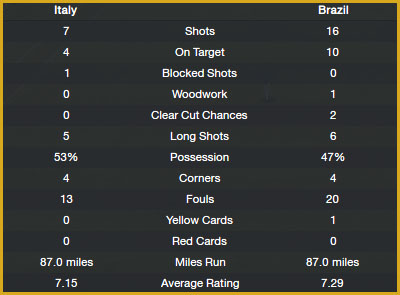 [110] Brazil protecting this lead, Italy look like they’re run out of ideas getting the ball forwards. Hosts ten minutes from glory.

[112] Space opens up for Lucas Leiva after Ramires bursts down the left and finds his team mate. Nocerino tracks back and robs him.

[112] Tangle in the area between Thiago Silva and Mario Balotelli. Caution for the Italian, presumably for diving. He flung himself to the ground following the Brazilian skipper’s challenge.

[113] Forestieri spots Victor slightly off his line but lofts it over the top.

[114] Leonardo Bonucci is cautioned after he bundles into the back of Leandro Damião. Just over five minutes to go. Getting scrappy here as Italy fight for their lives.

[117] Brazil taking an age over restarts, starting to play the ball into the corners.

[118] Leandro Damião has a chance to wrap it all up after a great run by Ramires, but he takes an extra touch when he’s twelve yards out and Balzaretti gets back to challenge.

[119] Giuseppe Rossi has a pot-shot from 25 yards but it’s no trouble for Victor who pushes it away before Marcelo clears.

[120] Federico Balzaretti takes one for the team as he hauls down Leandro Damião on half-way as Brazil launch a counter-attack. Booking for the full-back.

[120] Rossi again hits one from distance but Victor gets behind it.

[120] Every Italian pushing forwards, save Siriglu. Brazil happy to just hit the ball long when they have an opportunity to clear. Seconds to go here.

[120+1] Balzoretti gets away down the left, last chance for a cross. Six men to aim at, but Thiago Silva heads away at the near post, and the final whistle goes! Brazil win their sixth World Cup!