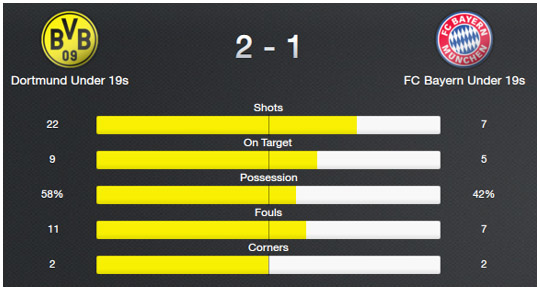 Manager Rodolfo Borrell was present as Dortmund U19 earned dominated throughout their 2-1 friendly win against Bayern Munich this afternoon. Dominik Baron continued his encouraging return from injury but it was the performance of Ogün Gümüstas that Borrell decided to pick out. The 18 year-old striker took his goal well and generally looked lively.

Dortmund peppered Dziewulski’s goal during the first-half but didn’t test him enough, but finally made the breakthrough five minutes after the break when Gümüstas slotted home from 15 yards.

With Kristof Müller keeping Bayern at bay at the other end, substitute Masallah Aydemir sealed the win inside the final six minutes when he turned home Samy Bourard’s cross. Dusan Prodanovic pulled one back almost immediately for the visitors when he chipped Müller from the edge of the box, but BVB had enough about them to see out the win.

They’re back in competitive action next Sunday when they travel to last year’s Group 3 winners Schalke.