In a performance that Gray Surman called the most humiliating display of his career, Dortmund collapsed at Fortuna Düsseldorf, in a staggering six-nil defeat against the side that beat them in the Supercup back in August.

Making four changes, including both full backs, from the team that lost in midweek at Hamburg, Surman included Cimo Röcker, Andreas Beck, Marco Reus and Kevin Großkreutz in the starting eleven, with the latter making his first appearance of the season.

There were absolutely no positive points from the Dortmund performance, save for a Weidenfeller penalty save, and the match report below reflects that. BVB are back in action on Wednesday with the visit of Legia Warsaw.

Welcome to the Esprit Arena where Fortuna Düsseldorf welcome Borussia Dortmund in a rematch of the Supercup from back in August.

BVB have made four changes from the side who lost at Hamburg in midweek, one enforced. Out goes the injured Sven Bender alongside Lewandowski, Schmelzer, Koch. In come Andreas Beck, Cimo Röcker , Marco Reus, and Kevin Großkreutz in his first appearance of the season.

[01] Early touch for Roman Weidenfeller as Cimo Röcker plays the ball back to him. He finds Marco Reus whose cross is put behind by Patrick Funk for a corner inside 45 seconds for the visitors.

[02] Ivan Perisic’s corner drops in at the near post, Mats Hummels prods it towards goal but it’s cleared off the line.

[06] Patrick Funk hits a volley well wide as the ball spins off Mats Hummels 20 yards out.

[08] Jefferson Farfán has put Schalke in front at home to leaders Hamburg.

[11] DÜSSELDORF 1-0 DORTMUND: Nando Rafael has all the time in the world when he picks the ball up 25 yards out. Defenders back off and back off, and in the end he curls the ball past Weidenfeller from the edge of the penalty arc for the opener. 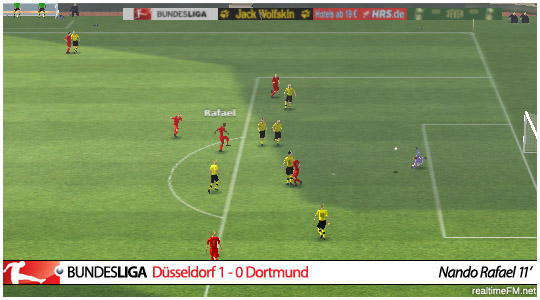 [15] DÜSSELDORF 2-0 DORTMUND: Staggering stuff from the champions as the back four just crumble. Marcel Risse runs at the defence who don’t put a challenge in. Rafael’s movement opens up space and Risse drills it home from 15 yards. 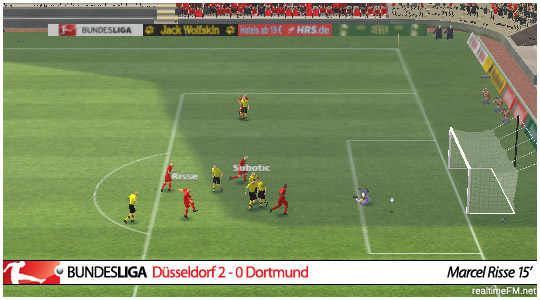 [17] Kevin Großkreutz comes within inches of pulling one back for Dortmund, as his cross takes a deflection and wrong-foots Weis, but Funk is on hand to clear it off the line.

[18] Hummels heads behind a Lambertz ball to five Düsseldorf a corner.

[19] PENALTY! Lambertz whips the corner in, and Kevin Großkreutz and Tonel grapple with each other. The referee spots a shirt-pull and points to the spot!

[25] Corner for Düsseldorf. Hummels puts behind Risse’s cross from the right.

[30] Half hour gone and BVB haven’t forced a save out of Weis yet. Lacking spark all over the pitch.

[32] Great save by Weis to push a Schieber header round the post. Lovely ball chipped into the box by Großkreutz.

[33] Malezas throws himself to the deck at the restart and the referee buys it, penalising Hummels.

[34] DÜSSELDORF 3-0 DORTMUND: Johannes van der Bergh has scored his first goal for the club with an audacious chip from 30 yards out. He beats Beck for pace before spotting Weidenfeller in a bad position, and lobs him from the angle. 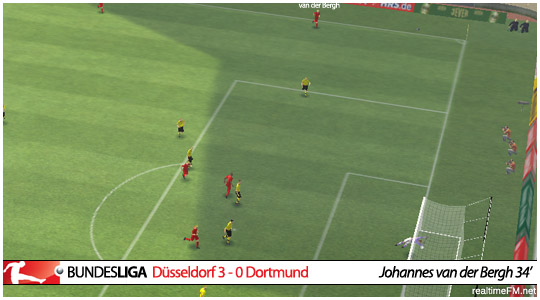 [35] The Dortmund bench is stunned. Düsseldorf deserve every moment of this.

[37] Julian Schieber goes for the top corner but puts it a whisker over the top from 18 yards.

[38] DÜSSELDORF 4-0 DORTMUND: This is unbelievable stuff! Nando Rafael has his second as he intercepts a sloppy pass at the back, beats Weidenfeller with a curling shot that comes back off the post straight to him to slot home. 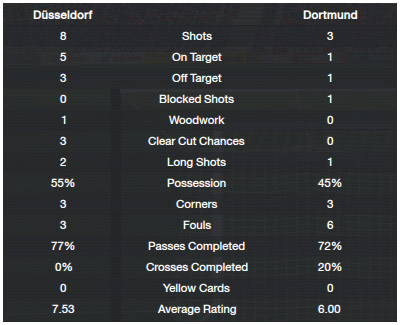 [HT] Düsseldorf have made a change too, bringing on Maranhao for Isidoro (7.3).

[49] WOODWORK! Viktor Fischer’s header rattles the crossbar, with Weid well-beaten. He got up above Tonel and met Beck’s cross well, but is a whisker away.

[50] Maranhao curls a 25-yard free-kick round the wall but Weidenfeller gets behind it.

[57] Beck works the ball into the edge of the box from the right, but Weis saves Schieber’s half-volley.

[59] Maranhao holds his head in his hands after he misses a great opportunity to grab a goal. Funk’s ball over the top is latched on to, he rounds Weidenfeller but hits the side netting from a tight angle.

[64] Viktor Fischer wins Dortmund a corner with a good run down the left.

[72] DÜSSELDORF 5-0 DORTMUND: It’s a hat-trick for Nando Rafael as he probs home from inside the six-yard box. It’s a well-timed run to the near post to collect a Lambertz cross, turning it past Weidenfeller. 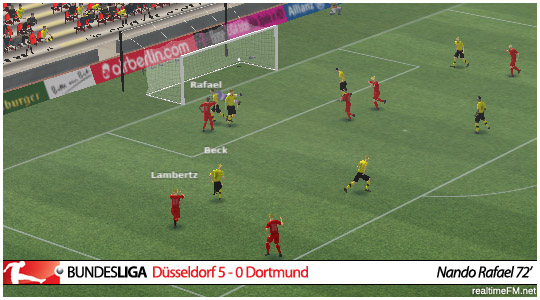 [74] Another corner for Dortmund, but all desire has been blown out of the side. A woeful performance from the champions.

[74] Weis makes a magnificent save to tip Subotic’s header over the bar at full-stretch.

[77] DÜSSELDORF 6-0 DORTMUND: It’s six! This is phenomenally bad from the visitors. Rafael runs at the back four, before squaring towards Schahin. He’d have a tap-in, but it’s Mats Hummels who gets the final touch to the cross putting it past his own ‘keeper.

[82] Samy Bourard has a go from 20 yards but curls his effort wide. Rare moment of attacking prowess from Dortmund.

[84] Nando Rafael curls a 22-yard free-kick round the Dortmund wall and half the ground erupts in cheer as it ripples the net, sadly it’s from the outside.

[85] Fischer and Bourard each have a crack. The Dane has his effort blocked before the Belgian drills a low shot wide.

[88] Penalty shout for the visitors as Patrick Funk looks to hold back Viktor Fischer. Dortmund awarded a corner, nothing else.

[90+1] Samy Bourard has another effort from just outside the box but he bends it wide. 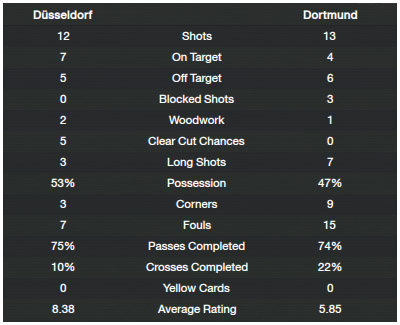 Words fail me in the press box as the BVB staff and players stare at each other in disbelief. Whatever happened today has to never be repeated. The club has four days to pick themselves back up before their Champions League tie at home to Legia Warsaw on Wednesday. Expect wholesale changes, no one save Lars Bender covered themselves in glory tonight.