Stevan Jovetic and Roman Weidenfeller are kings of Dortmund tonight after their heroics at either end inspired BVB in their shootout FIFA Club World Cup Final win over Atlético Mineiro in Morocco.

With BVB two goals down inside fifteen minutes, Jovetic came on as a second-half substitute and hit a six-minute brace to force extra-time before putting the European champions in front after the turnaround in extra-time. After conceding a late equaliser, Roman Weidenfeller saved spot kicks from Souto and Eron to win BVB their fifth trophy in seven months.

Grayson Surman made five changes from the side that came through the Semi-Final tie against Al-Sadd, with Weidenfeller restored in goal, Andreas Beck and Marcel Schmelzer at full-backs, and Kevin Großkreutz and Mario Götze in the midfield.

Despite a bright start, Dortmund quickly found themselves staring at a two-goal deficit when Jõ hit a brace  of goals on the break, and when Götze suffered a facial injury midway through the first-half, the travelling fans weren’t optimistic.

Lars Bender came off before the break too with a dead leg, and shortly after the interval, Surman had used all three subs with the introduction of Jovetic.

With half-hour to play, Jô went down theatrically in the box over Beck’s challenge and having already been cautioned, was shown a second yellow card by the referee from Mozambique and Dortmund knew the Brazilians were there for the taking.

Jovetic pulled a goal back for BVB, and then drew them level shortly after by turning home another Andreas Beck cross. Into extra-time and Jovetic headed Dortmund in front for the first time in the game, but they were undone by an offside goal.

To the dreaded shootout and after Jovetic, Perisic, and Schürrle had scored for Dortmund, Weidenfeller pushed Souto’s spot-kick onto the post. Mats Hummels put all the pressure on Eron by converting BVB’s fourth, and Weidenfeller came up trumps by tipping the fourth Mineiro penalty away to win the trophy.

[00] Welcome to Rabat, Morocco, for the eleventh FIFA Club World Cup Final, introduced in 2000 and then held annually since 2005. We’ve seen four winners from Brazil, and six European sides.

[00] Dortmund get the game under way!

[01] André Schürrle hits a curling effort from the edge of the box but it bends wide of goal.

[03] Eron is shown an early yellow card by the referee from Mozambique after he’s late on Marco Reus. From the free-kick, Reus heads at goal from a Schürrle delivery to the far post but Victor saves easily.

[06] Dortmund have started brightly, with attackng intent, but haven’t tested Victor yet. Lewandowski has had a couple of shots blocked inside the box as Mineiro defend deep.

[08] MINEIRO 1-0 DORTMUND: The Copa Libertadores champions are in front as Weidenfeller makes a great save to deny a Bernard header, but is powerless to prevent Jô from stealing in at the far post to knock the loose ball over the line.

[09] Andreas Beck fizzes a shot inches over the top as BVB attack from the restart. Good work from Schürrle to switch the play.

[10] Jô is cautioned after a push on Schürrle. Brazilians certainly a fiesty side.

[11] Reus buys a corner off Eron, first of the match. Subotic’s tame header is straight at Victor.

[13] Lewandowski tries to play Reus clean-through but the ball is a little behind him. He still gets the shot aweay with Victor parries before Mineiro clear.

[14] MINEIRO 2-0 DORTMUND: A great goal for the Brazilians and it’s Jô who has doubled his personal tally tonight. He beats the offside trap, latches onto Bernard’s ball, outstrips Mats Hummels for pace before smashing into the top corner from inside the box. 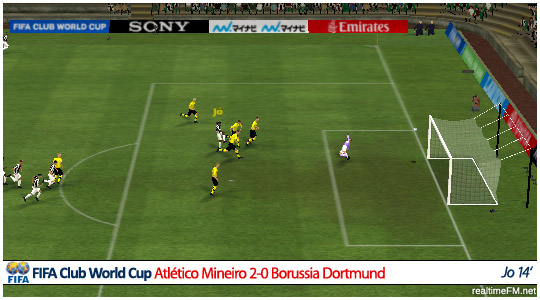 [18] Lewandowski has the ball at his feet inside the box but he’s closed down by three defenders. Großkreutz can’t work a shot away either.

[24] Cícero puts the ball right across the face of goal but bernard can’t connect at the far post.

[27] Éder’s aerial challenge on Mario Götze (6.4) is late and he’s ended the German’s game. No malice, but clumsy and forceful and Dortmund are forced into an early change. On comes Ivan Perisic.

[29] Bernard’s diving header creeps wide as he meets Eron’s cross from the left.

[36] Lars Bender has been clattered by Cícero and is receiving treatment. Doesn’t look good, but he eventually returns to the field gingerly.

[40] Dortmund firing crosses into the box, but can’t break down this Mineiro defence.

[42] Bender (6.6) is being replaced for Dortmund as he can’t continue. On comes Dennis Praet.

[45+3] Hummels heads behind a cross from the left and Mineiro have their first corner.

[45+4] And quickly their second as Subotic gets the final touch as he and Réver climb to meet the delivery. No time to take it though as the first half is brought to a close.

[46] Fillipe Soutto is happy to concede a corner as Andres Beck charges at him down Dortmund’s right.

[47] Réver heads away Praet’s corner, but Lewandowski squares to Schürrle who smashes it towards goal. It takes a deflection off a defender and falls to Beck who is clearly tripped in the six-yard box, but the flag’s up against him for offside.

[48] Andreas Beck is booked after he clatters Eron.

[53] Final roll of the dice for BVB as Stevan Jovetic replaces Großkreutz (6.6). 4-4-2 for the European champions now.

[57] Mats Hummels gets a yellow card for his heavy challenge on Bernard. Mineiro make their first chance, replacing Éder (7.0) with Richarlyson.

[60] Weidenfeller saves from Jo on the edge of the box. Dortmund counter quickly and win a corner after Schürrle and Jovetic exchange headers in the box. Eron heads it away from Praet’s delivery to the near post.

[62] Massive call for the referee here as he’s penalised Jô, already been booked, for diving in the box over Beck’s challenge. Dortmund gave the ball away cheaply and were caught on a quick counter started by Eron…

[62] Dismissed! No hestitation from the referee who shows Jô his second yellow card and the striker trudges off. Mineiro make a change before play resumes, replacing Serginho (7.0) with Roger.

[67] Robert Lewandowski is penalised for a push on the edge of the box, ending a great flowing Dortmund move. Neither side tremendously happy with the man in the middle tonight.

[69] Ivan Perisic goes in the book after he brings down Cícero on half-way.

[72] Dortmund havent forced Victor to make a save in the ten minutes since the dismissal and Surman is getting agitated with his sloppy front line from the bench.

[74] MINEIRO 2-1 DORTMUND: An incisive breakaway from Dortmund as they get right back into to match. Reus picks out Beck on the right hand side, and the full-back gets to the line before crossing back to the far post for Stevan Jovetic to slot home. Game on!

[76] All the momemtum is with Dortmund, who are going for it with both barrels. Victor makes a full-stretch save to tip away a Schürrle low drive after Dortmund put the ball into the box from the right.

[77] Robert Lewandowski gets on the end of a Schmelzer cross but he can’t keep his header down. Clear cut chance to level it.

[78] Dennis Praet is the sixth player in the book as he pulls back Cícero.

[80] MINEIRO 2-2 DORTMUND: It’s been all Dortmund since the sending-off, and they’re back on level terms through super-sub Stevan Jovetic who grabs his second goal in six minutes when he powers a header past Victor from Beck’s cross. Tenth goal of the season for BVB’s record signing. 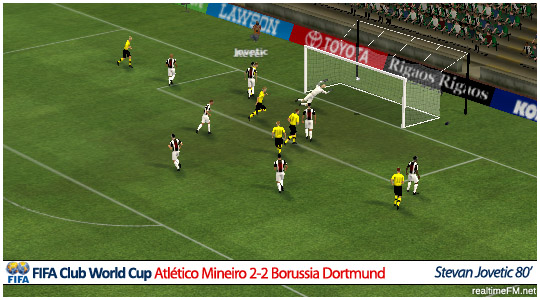 [84] Mineiro are pushing hard for a late winner and Roger almost provides it as he intercepts a loose pass and curls just over the top with a lob.

[86] Woodwork! Andreas Beck almost has himself a hat-trick of assists as he pulls the ball back to Marco Reus fifteen yards out but the winger hits the bar with a half-volley. Perisic keeps the ball in and crosses for Lewandowski, but his header is saved.

[89] Reus gets inside the area and squares for Lewandowski but the shot is blocked. Can someone nick a winner before an extra half-hour?

[90] Reus wins Dortmund a corner when his cross comes off Vitinho. Victor denies Hummels on the line as he throws himself at his shot. So close!

[90+2] Mats Hummels and Vitinho clash heads just outside the Dortmund box and both look groggy. Play is halted for both to get treatment. Both sides have made all three subs. Glance at the watch from the referee.

[90+3] Praet works the ball into the box for Lewandowski but he can’t get a shot away as he’s instantly closed down. Mineiro clear and that’s the end of ninety minutes.

[FT] It’s extra-time for the second time in four days for Dortmund, on the cusp of their winter break. Can they pick up a trophy to end the year todnight, or will Mineiro wrestle the trophy back to Brazil?

[93] BVB quickest back out the blocks, with Reus and Jovetic having shots blocks from the edge of the area.

[95] Jovetic wins Dortmund their fifth corner with a positive run into the box, drawing the challenge from Soutto. Hummels gets on the end of Praet’s delivery but Mineiro clear away from inside the six-yard box.

[96] Mineiro concede a free-kick that Perisic lofts into the box. Ramon’s header drops short and Jovetic sweeps a shot towards goal from ten yards out but he puts it a yard wide.

[97] Marco Reus leavs three defenders bamboozled as he cuts across from the right, turns a man inside out but blazes over the top from just inside the box. That would have been an amazing goal.

[106] Fifteen minutes between us and a shootout. Mineiro get us back under way!

[108] MINEIRO 2-3 DORTMUND: Stunning stuff as Stevan Jovetic has sealed his hat-trick! Soutto tripped Schürrle 35 yards out and Ivan Perisic lofts the free-kick in towards the far post where Jovetic beats Eron to the bal and beats Victor with the header. 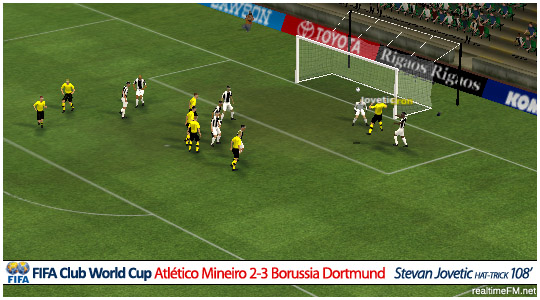 [113] MINEIRO 3-3 DORTMUND: The Brazilian side needed something as they haven’t had a shot on goal for almost three-quarters of an hour, and route one stuff has drawn them level. Roger lifts the ball over the top for Vitinho who waits for Weidenfeller to close him down before slots it home. 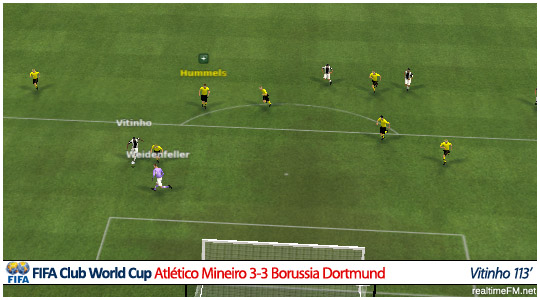 [114] Replays show Vitinho was offside, but the ten men are level with six minutes to play.

[118] Reus is at the heart of everything for Dortmund, and he gets on the end of a Beck cross but it’s straight down Victor’s throat and the ‘keeper saves.

[120] BVB have a last minute corner when Réver slices a clearance behind from Beck’s deep cross.

[120] Goal line scramble as Mats Hummels heads towards goal, Victor saves but the ball drops behind him. Richarlyson doesn’t get a strong touch off the line but Hummels can’t get any contact to knock it home. Thirty seconds left. 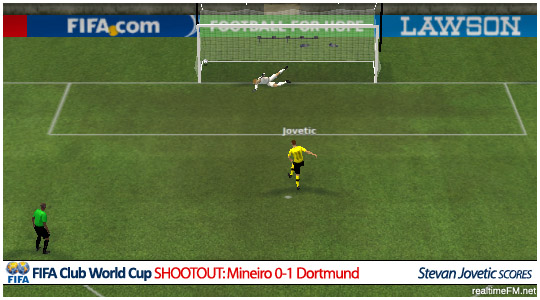 [#2] Roger drills it straight down the middle as Weidenfeller goes right. BVB 2-2 CAM. 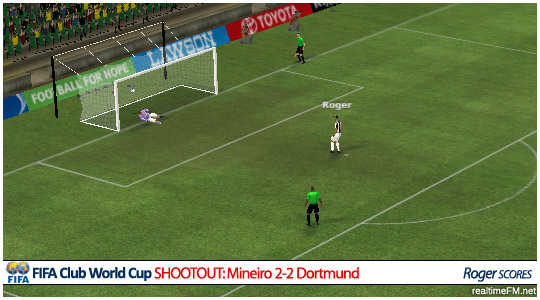 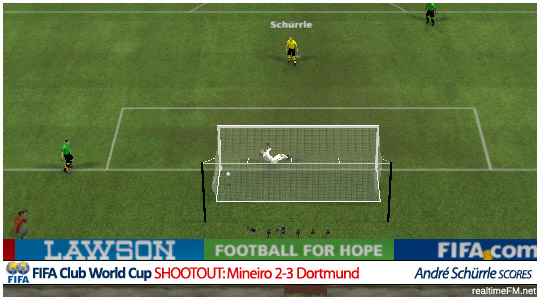 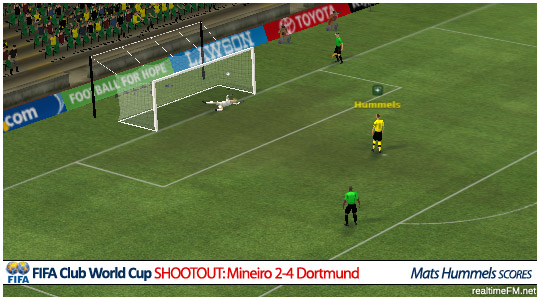 [#4] Eron must score for Mineiro. Saved! Same spot as Soutto and Weidenfeller tips it away. Borussia Dortmund win the FIFA Club World Cup, 4-2 on penalties following a thrilling 3-3 draw after extra-time! 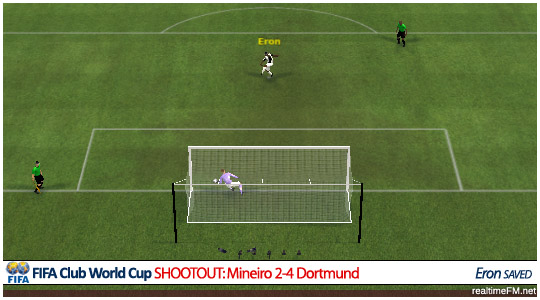 It’s all over! Dortmund triumph on penalties just as they did in Lisbon in the UEFA Champions League Final back in May. Plaudits will praise Surman’s half-time inspiring speech, but questions will be asked about their inability to take a game by the scruff of the neck early on despite a bright start.

It’s a well-earned and well-deserved break for the squad for a fortnight now, ahead of a trio of friendlies before the Bundesliga campaign resumes in mid-January.