The Borussia Dortmund fired three scoregoals at the home of the MLS Champions Chicago Fire this afternoon in a comfortable victory in today’s Champions Exhibition Matchup sponsored by Big Pete’s Weinerdogs.

We’re ready for a giant helping of soccerball as reigning European and World champions the Borussia Dortmunds have brought their franchise stars to Illinois for an exhitibion matchup against current MLS champions Chicago Fire.

The visitors have made eight changes from their last outing, a 4-2 victory at Anderlecht in the Europa League on Thursday. In come Julian Koch and Cimo Röcker at full-back, Felipe Santana is in at centre-back, midfielders Viktor Fischer, Jos Verniers and Samy Bourard all start, while Robert Lewandowski and Julian Schieber lead the attack.

[00] Kevin Stott is today’s referee and he gives the commencement whistle!

[01] Dortmund win a corner restart when Espinoza head touches the ball behind his own goalkeeper line. Röcker catches Elbaum in possession and crosses into the six-yard zone. Verniers delivers the set piece towards Subotic but his shot is wide.

[03] MacDonald E-I-E-I-Os a barnstormer of a shot inches over the top from approximately 26.74 metres from the goal target.

[03] No Pause for thought as the Chicago man is naughty in the challenge and upends Fischer. Reus flashes the free-kick past the post from 25 yards.

[09] Röcker fires the ball in towards the far upright, but Garner scrambles it away ahead of Schieber.

[10] Elbaum concedes a needless corner with a poor backpass to his ‘keeper. Lockhart heads away.

[13] A marauding Koch is halted illegally by Espinoza right in front of the touch judge. Verniers works the free-kick into the box and Schieber is denied six yards out by a smart save from Carlton.

[17] CHICAGO 0-1 DORTMUND: Viktor Fischer receives a ball from Schieber, beats two men outside the box and slams the ball past a diving Carlton from 15 yards to give the German side the lead.

[25] Dortmund looking comfortable here, but the Fire are seeing a lot of the ball. They turn the play around quickly, getting the ball forwards when won back, trying to catch the visitors on the counter.

[33] Carlton gets his body behind a low drive from Verniers from just outside the box.

[36] CHICAGO 0-2 DORTMUND: The European side double the lead when Julian Schieber glances a header home from a Reus free-kick. Toomer at fault for giving away the setpiece with a clumsy challenge on Verniers. 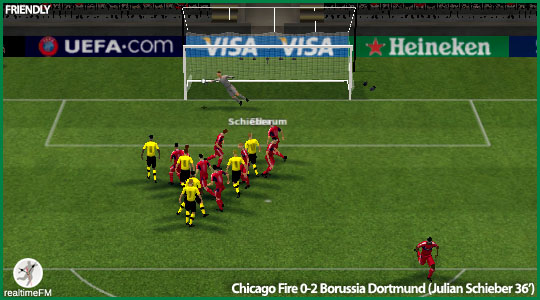 [40] Great save from Carlton who punches a curling Reus free-kick over the bar.

[43] Fischer wins Dortmund their fifth corner. Subotic gets on the end of Verniers’ delivery but powers his header inches over the top.

[45] Toomer blazes a shot over the bar from long-range.

[HT] Two changes for the Fire at the break. On come Adrian Garenr and Mathew Braun for Mortimer (6.7) and Garner (6.6).

[52] Third change for Chicago: On comes Anthony Castillo for MacDonald (6.5).

[55] Julian Koch (6.9) concedes a corner, and that’ll be his last action as he’s replaced by Andreas Beck. Dortmund clear the danger.

[61] Beck gets away down the right and floats a deep cross in that Chicago can’t clear, before Lars Bender has a shot blocked.

[68] Bungert is denied a début goal by Carlton as he smothers the youngster’s close-range shot.

[70] Two more changes for the home side. On come Peter Cassar and Fabien George for goalkeeper Carlton (6.7) and Lockhart (6.6).

[72] CHICAGO 0-3 DORTMUND: Game over, surely. Lars Bender wins the ball back in the middle of the park, looks up and sends the ball left for André Schürrle who sprints over halfway, outpaces Elbaum and slots past Cassar. First touch for the Chicago ‘keeper is to pick the ball out of his net.

[72] Chicago make another change before we restart. Jeff Kawulok is on for Friedrich (5.4).

[76] Toomer fluffs a great chance to pull a goal back after he gets behind the Dortmund defence, but he misses the target one-on-one from 18 yards out.

[77] Ernest Ashby is cautioned after he upends Beck.

[80] Bernd Kandizora is played through by Jovetic but he’s forced wide of goal and can’t get a shot away.

[82] Beck wins Dortmund a corner when Ashby challenges him in the box. Generous refereeing there, doesn’t look like the Chicago man, cautioned five minutes ago, got any of the ball.

[84] Another change for Chicago as Daniel Kann replace Elbaum (7.0).

[85] Kann shoots wide after he beats Santana to a through-ball.

[90] Inside the final thirty seconds of normal time, Weidenfeller is finally called upon to make a save as he denies Braun from ten yards out when Dortmund can’t clear their lines from a long throw-in.

[90] One additional minute, despite all the substitutions. Fourth official ain’t got time for’ dat.