Gray Surman’s 100th competitive match in charge of Dortmund ended in defeat by a Wolfsburg side who move level on points with Hamburg and Leverkusen, six points behind BVB. Dortmund huffed and puffed throughout, but couldn’t find a way past Diego Benaglio, and Naldo predictably put in a man-of-the-match performance to keep a clean sheet for the visitors.

After losing Marco Reus to a serious arm injury on the stroke of half-time, BVB were forced into using all three substitutes before the break. Alas, one of those, Jos Verniers slipped with twenty minutes to play and Nassim Ben Khalifa kept his composure to slot Wolfsburg in front.

Mats Hummels headed against the bar, with Robert Lewandowski hitting the outside of a post, but the hosts couldn’t find the back of the net.

Welcome to Signal Iduna Park where Dortmund host Wolfsburg in their game in hand over the rest of the league. The visitors made the 300km trip sitting fifth in the league, with a win enough to put them level on points with second- and third-placed Hamburg and Leverkusen.

Dortmund are six clear of the chasing pack, and can go into the final six matches of the season with a nine point gap with their first win over tonight’s opponents since January 2013.

Three changes for Dortmund as they bring in Sven Bender to replace Jos Verniers in the middle, Mario Götze starts ahead of André Schürrle, and Dennis Praet is in for Ivan Perisic behind the striker. All three replaced players start on the bench.

No Bas Dost for Wolfsburg today as the club’s top-scorer sits out the game after collecting his fifth booking of the season in Saturday’s draw with Leverkusen.

[00] Felix Brych gets us under way, with the hosts kicking-off!

[08] It’s been a quiet opening to the game, but Wolfsburg have an opportunity here as Praet fouls Poulter about 25 yards out. Ortigoza bends it round the wall but Weidenfeller is equal to it.

[09] Lewandowski turns his man and gets on the end of a fine ball from Lars Bender, but his first-time shot rifles into the side netting.

[12] Jönsson pounces on a slip by Hummels but he hits it straight at Weidenfeller from the edge of the box.

[14] Maza’s turn to slip as he gifts the ball to Lars Bender who slots it through to Praet between the two centre backs, but Benaglio is quick off his line and smothers before the Belgian can get a shot away.

[16] Corner for Dortmund as Djuricic slides to deflect Schmelzer’s cross behind. Rodriguez clears from a Hummels header.

[17] Neven Subotic lands awkwardly following an aerial challenge with Polter. He’s receiving treatment on the sidelines. No centre-back on the bench for BVB tonight.

[23] Dortmund win a corner with a nice attacking move getting the ball out wide to Reus. Praet’s delivery is cleared, though.

[26] Sebastian Polter (7.0) has been replaced by Nassim Ben Khalifa after a stoppage following the striker pulling up with a suspected hamstring problem.

[29] Jönsson wins a free-kick 25 yards out after Subotic holds him back. Naldo hits it into the wall and it goes behind for a corner which is headed behind by Schmelzer. Naldo gets on the end of the second one but puts it well wide.

[34] Götze is getting a lot of space on the left and has the beating of Ortigoza, but his crosses towards Lewandowski are cleared each time by Naldo.

[36] Sven Bender looks hurt after a firm, but fair, challenge from Medojevic.

[39] Maza concedes a corner when Reus almost gets past him. Praet’s delivery is nodded away by Naldo.

[45+1] Jönsson nearly gets in between Hummels and Subotic after the former’s challenge on Ben Khalifa sees the ball squirm into his path, but Weidenfeller is quickest to react.

[45+1] Marco Reus is tackled in the box, with the ball going for a corner, but he’s landed very awkwardly and looks in some distress. Dortmund make an unexpected double change, bringing on both Steven Jovetic and André Schürrle for Praet (6.7) and Reus (6.6).

[45+3] Götze’s corner is cleared away, but Beck whips the ball back in to the box where Naldo heads away off the line under pressure from Jovetic.

[46] Wolfsburg kick-off the second-half. They immediately concede possession and Lewandowski wins a free-kick two yards outside the box. Götze’s effort is straight into the wall.

[47] Benaglio acrobatially tips over a Schürrle effort. Götze whips the corner into the near post for Hummels who has his header hacked off the line by Jönsson before Naldo puts it behind.

[50] Dortmund win a pair of corners, and on the second, Mats Hummels sees his header clip the crossbar on the way over.

[62] Second change for Wolfsburg: On comes Kevin Pannewitz for Ortigoza (7.0).

[64] Yellow card for Jos Verniers after he bodychecks Fágner in the centre circle.

[68] DORTMUND 0-1 WOLFSBURG: The visitors take the lead midwayu through an otherwise dull second-half when Jos Verniers slips and gifts Nassim Ben Khalifa possession. He’s got an unimpeded run towards goal and slots past Weidenfeller. 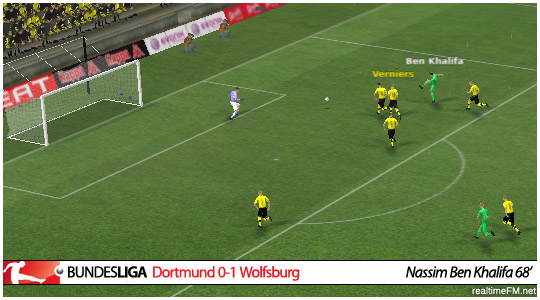 [70] Schürrle fizzes an effort over the top.

[78] It’s certainly not been a game to tell your grandkids about, but Dortmund almost level things through Lewandowski who has his diving header pushed wide by Benaglio.

[81] It’s another Dortmund corner as Fágner gets a touch to Schmelzer’s cross. It’s cleared away though. BVB knocking on the door, but can’t find a way past Naldo and Benaglio.

[85] Another Dortmund corner is cleared away. Looking like a big thre points for the visitors tonight in a rather tedious match.

[86] Wolfsburg win a corner through Maza as Verniers challenges him when he’s about to cross. Dortmund clear and try to counter.

A home defeat for the leaders after a terribly dull ninety minutes. It seemed almost predictable that the visitors would scrape a victory with Naldo in his usual terrific form at the back, and the goal came from an unfortunate slip from youngster Verniers.

Dortmund can’t be too disheartened though, as they had to chop and change throughout due to knocks and injuries after a tough battle at the weekend. They remain six clear at the top though, with the battle for second really heating-up as Wolfsburg join Hamburg and Leverkusen on 53 points. 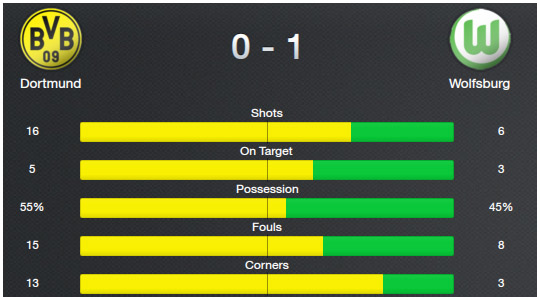