Forty clubs progressed through to the Third Qualifying Round of the Europa League tonight, allowing the full draw for the next phase to be finalised ahead of the ties taking place on 01 and 08 August. The only German club in the competition at this stage, SC Freiburg, booked their place there with a 2-0 home win over Croatian side Cibalia to win 4-1 on aggregate.

Elsewhere, Torpedo Zhodino of Belarus turned-around their 0-1 deficit from the away leg with a 3-1 win over Qarabag Agdam of Azerbaijan to win 3-2 on aggregate, the only team to progress after losing the first leg. No great shocks were served up across the continent, and it was AE Limassol who progress with the best record – an 8-0 aggregate win over Borac.

Nothing particularly stands out from the next round’s fixtures, though SpVgg Greuther Fürth become the second German club in the competition so far this season and have a tricky first leg away at Red Star Belgrade. Dortmund manager Surman’s former-club Wigan Athletic make their European debut with a home tie against Beitar Jerusalem. 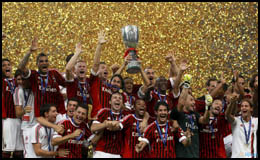 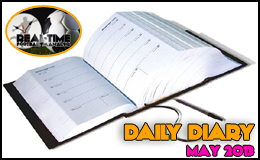 AC Milan beat their closest rivals Inter 1-0 in the TIM Coppa Italia Final tonight, with Robinho’s 77th minute goal proving decisive in a game of few clear-cut chances. Milan, who finished 17 points behind title-winning Inter in Serie A this season lifted the trophy for the first time since 2003.

Celtic won the Scottish FA Cup after a 3-0 win over arch-rivals Rangers at Hampden Park to seal a domestic double.

In France, Ligue 1 wrapped up with Stade Rennais coming from behind to win 3-1 at Lyon to seal second-place behind runaway champions Paris Saint-Germain. The result cost Remi Garde his job at Lyon, who finished 5th, when a win today would have seen them clinch the last Champions League spot.

The top three places in Spain can be confirmed on Tuesday. Real Madrid will win the league with a point, as Barcelona won’t be able to overhaul them. Similarly, Sevilla will seal third place with a point.

A Borussia Dortmund source today admitted that they would be foolish not to consider someone of Gray Surman’s calibre for the manager job and that they would be stepping up their interest should Surman indicate a willingness to enter discussions. The source did concede, however, that nothing had yet been set in stone and there is some way to go before finalising things.

It is understood representatives of both parties will meet over the weekend and a decision will made on Monday. Surman is manager at Wigan Athletic, and the Canadian guided them to 6th place in the Premier League in his first season of management.

The Wigan Athletic board of directors have released a press statement indicating their disappointment at current manager GS’s insistence on linking himself with jobs at other clubs. The press release comes in the wake of Surman’s recent interest in filling the vacancy at Borussia Dortmund. GS took over the reins at WAFC in July 2012 and steered the club to their highest-ever league finish of 6th in the Premier League, finishing runner-up to title-winning Andre Villas-Boas in the Manager of the Year awards.

In January 2013, GS was shortlisted for the then-vacant Chelsea job after Robert Di Matteo’s firing with the Londoners languishing in 9th place, but turned down the job. Luciano Spalletti’s Chelsea pipped Wigan to 5th place by four points. GS declared last month that he would love the honour of taking England’s youngsters squad to the FIFA U-20s World Cup to be held in Israel this summer.

Borussia Dortmund are looking to a new manager to fill Jurgen Klopp’s after he replaced Brendan Rodgers at Liverpool last week, and are set to make an announcement on Monday (27 May) after interviewing candidates over the weekend. 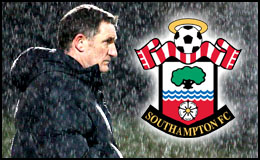 Southampton haven’t wasted any time in replacing Nigel Adkins who left the club on Monday after the club finished bottom of the Premier League by some distance. Middlesbrough manager Tony Mowbray has been installed as the new helmsman at Saints, leaving the Teesside club after three seasons in charge, with a 12th place finish in 2013.

According to The Guardian, Wigan’s Gray Surman has expressed a desire to take the vacant manager post at Signal Iduna Park. Surman is considered by many to be a leading candidate for the job and his interest is bound to increase speculation that he will indeed be offered the job at Borussia Dortmund. Surman appears to be stepping up the job hunt, despite guiding Wigan Athletic to a 6th-placed Premier League finish, having been shortlisted for the Chelsea vacancy in January and having approached the FA for the England U-20s role at the forthcoming FIFA U-20s World Cup.

Borussia Dortmund manager Jurgen Klopp has stunned the footballing world by immediately stepping into the vacancy at Anfield following Brendan Rodgers parting company with Liverpool yesterday. Klopp twice won the Bundesliga with Dortmund, including the domestic treble last year. Former Werder Bremen player Thomas Schaaf has been installed as the bookies’ favourites to replace him. Dortmund finished 3rd in Bundesliga this season, 15 points off the pace of winners Bayern Munich. Dortmund finished 3rd in their Champions League group, and were knocked out in the second round after dropping into the Europa League. Liverpool finished a disappointing 7th in the Premier League and won’t be playing European football next season.

Wigan Athletic manager GS has applied for the vacant position at Borussia Dortmund.

Meanwhile, Luis Fernandez has been announced as the new manager at  Bastia.

The following Premier League clubs have changed their manager since the start of the 2012/13 season: